The city of Winston Salem is a product of the merging of the two neighboring towns of Winston and Salem in 1913.

The origin of the town of Salem dates to January 1753, when Bishop August Gottlieb Spangenberg, on behalf of the Moravian Church, selected a settlement site in the three forks of Muddy Creek. He called this area “die Wachau” (Latin form: Wachovia) named after the ancestral estate of Count Nicolaus Ludwig von Zinzendorf. The land, just short of 99,000 acres (400 km2), was subsequently purchased from John Carteret, 2nd Earl Granville.

On November 17, 1753, the first settlers arrived at what would later become the town of Bethabara. This town, despite its rapid growth, was not designed to be the primary settlement on the tract. Some residents expanded to a nearby settlement called Bethania in 1759. Finally, lots were drawn to select among suitable sites for the location of a new town.

The town established on the chosen site was given the name of Salem (named after the Canaanite city mentioned in the Book of Genesis) chosen for it by the Moravians’ late patron, Count Zinzendorf. On January 6, 1766, the first tree was felled for the building of Salem. Salem was a typical Moravian settlement congregation with the public buildings of the congregation grouped around a central square, today Salem Square. These included the church, a Brethren’s House and a Sisters’ House for the unmarried members of the Congregation, which owned all the property in town. For many years only members of the Moravian Church were permitted to live in the settlement. This practice had ended by the American Civil War. Many of the original buildings in the settlement have been restored or rebuilt and are now part of Old Salem Museums & Gardens.[6]

Salem was incorporated as a town in December 1856.[7] Salem Square and “God’s Acre“, the Moravian Graveyard, since 1772 are the site each Easter morning of the world-famous Moravian sunrise service. This service, sponsored by all the Moravian church parishes in the city, attracts thousands of worshipers each year.

In 1849, the Salem congregation sold land north of Salem to the newly formed Forsyth County for a county seat. The new town was called “the county town” or Salem until 1851 when it was named Winston for a local hero of the Revolutionary War, Joseph Winston.[8] For its first two decades, Winston was a sleepy county town. In 1868, work began by Salem and Winston business leaders to connect the town to the North Carolina Railroad.[9] That same year, Thomas Jethro Brown of Davie County rented a former livery stable and established the first tobacco warehouse in Winston. That same year, Pleasant Henderson Hanes, also of Davie, built his first tobacco factory a few feet from Brown’s warehouse. In 1875, Richard Joshua Reynolds, of Patrick County, Virginia, built his first tobacco factory a few hundred feet from Hanes’s factory. By the 1880s, there were almost 40 tobacco factories in the town of Winston. Hanes and Reynolds would compete fiercely for the next 25 years, each absorbing a number of the smaller manufacturers, until Hanes sold out to Reynolds in 1900 to begin a second career in textiles. 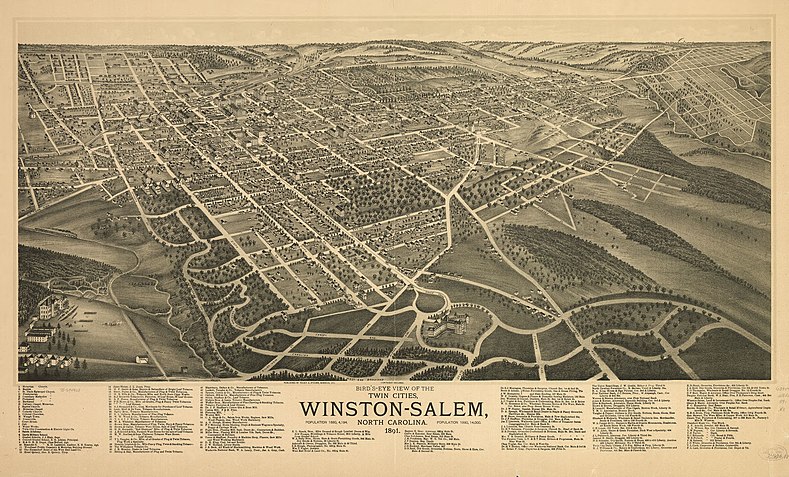 A map of then known “Winston-Salem” in 1891, showing the development of Main Street and Fourth Street during the industrial tobacco boom–dozens of tobacco factories appear in downtown Winston, including ones owned by Hanes and Reynolds.

In the 1880s, the US Post Office began referring to the two towns as Winston-Salem. In 1899, after nearly a decade of contention, the United States Post Office Department established the Winston-Salem post office in Winston, with the former Salem office serving as a branch. After a referendum the towns were officially incorporated as “Winston-Salem” in 1913. The USPS Address Information System (AIS) does not recognize the hyphen.[10] Ironically, the sign hanging on the USPS location in downtown Winston-Salem reads “United States Postal Service, Winston-Salem, NC.”

In 1929, the Reynolds Building was completed in Winston-Salem. Designed by William F. Lamb from the architectural firm Shreve, Lamb and Harmon, the Reynolds Building is a 314 feet (96 m) skyscraper that has 21 floors.[15][16] When completed as the headquarters of R.J. Reynolds Tobacco Company, it was the tallest building in the United States south of Baltimore, Maryland, and it was named the best building of the year by the American Institute of Architects.[17] The building is well known for being the predecessor and prototype for the much larger Empire State Building that was built in 1931 in New York City.[18] Every year the staff of the Empire State Building sends a Father’s Day card to the staff at the Reynolds Building in Winston-Salem to pay homage to its role as predecessor to the Empire State Building.[19]

Representing the BEST of Winston-Salem